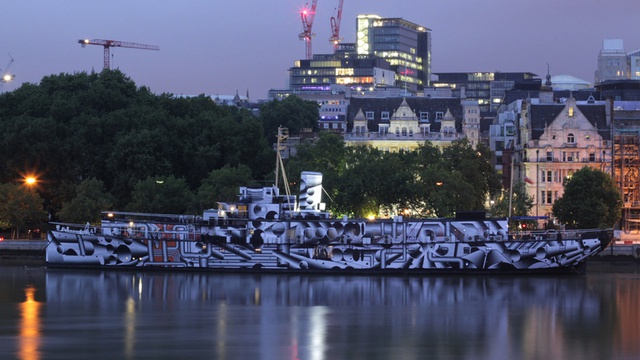 Don’t miss the new makeover of HMS President (1918) on the Thames, part of 14-18 NOW with whom we are working with as Marketing Consultants.
German artist Tobias Rehberger has wrapped HMS President (1918) in a striking new artwork, a contemporary take on the colourful ‘dazzle’ patterns in which First World War ships were painted.

‘Dazzle’ camouflage used disorientating shapes to make it harder for enemy submarines to gauge the direction and speed in which the ship was travelling.

HMS President (1918) is one of only three surviving Royal Navy warships from the First World War, moored at Victoria Embankment near Temple, but you’ll get your best view if you head to Blackfriars Bridge or the South Bank.

The dazzling of the HMS President (1918) is paired with the Edmund Gardner in Liverpool which was treated to contemporary artist Carlos Cruz-Diez’s interpretation of ‘dazzling’, and can be viewed at the dry dock, near the Albert Dock, Liverpool.